During the middle of our Puerto Rico trip (the rest of which is in the blog post here), we hopped a cheap ferry for $2/each out to the small island of Vieques for 4 very restful nights. The island is really small – about 21 miles by 4 miles – and has a laid-back Caribbean vibe and some of the most stunning beaches we have seen in all our travels.

We stayed in an apartment on top of the hill in the main town of Isabella II and we found it on Airbnb for $85/night. Our host was a mid-30s American guy who lived in Baltimore, MD for the couple months when he was not on Vieques renting out 2 of the 3 apartments in his building. He was very friendly and fun to talk to. The location of the apartment was perfect as well; since it was on top of a hill on calle Buena Vista, there was a fresh ocean breezes keeping the one room of the apartment cool at all times of the day. This was the view from the top of the hill:

Since there are only two small towns on the island – with not a single traffic light – there is not a lot to do from a sight-seeing perspective. The main activities are water related, which for us meant snorkeling and relaxing on the beach. Two thirds of the island was also home to a military base during WWII, which kept most of the island undeveloped and pristine. We found most everything on the island was a little more expensive due to the logistics of shipping it over, but overall the prices were reasonable and food was better than on the mainland. It’s super laid-back not just because of all the visiting tourists, but I think also because only 35% of the locals are employed. It’s pretty “poor” in terms of incomes as well – the median income in 1999 was $9,331 USD compared to $42,000 for the rest of the US.

Being an island, Vieques has beaches on all sides and our primary sightseeing goal was to check out all of them. I think we got to most of them, and certainly all the ones that are considered “can’t miss”. Our favorite was Caracas beach, with the second favorite being glass beach. Those are the first and second and last beaches in the pictures below, respectively.

Caracas beach is in the gated nature reserve, which is land owned by the US military just a decade previously. Today there is absolutely zero development and there is still relatively little tourism. At times when we were driving around the island in our rented Jeep Wrangler, it felt like we were explorers on a mission to discover hidden pirate gold!

Glass beach is named for the unusually large amount of sea glass washed onshore from an old waste dump site just a couple miles offshore. Needless to say we didn’t do any swimming at this particular beach (I’m sure it is safe for those who dare), but we did spend several hours hunched over, scanning the rocky beach for interesting bits of worn-down sea glass. We even found some blue glass, which is the rarest of all sea-glass. It turns out collecting sea glass is one of Elisa’s favorite beach activities, and she got really into it. She was sore the next day from all the stooping! We both had fun and collected a huge pile of treasures from the ocean. We plan to make a window from them for our kitchen:

Another cool thing about Vieques are the free-roaming horses which graze all over the island. Evidently, they all have owners and occasionally you will see one with a brand on its flank, but the owners allow them to roam freely throughout the year. Once a year, young and brave (and possibly foolish) locals gather the horses up, saddle them up and ride them across the island, stopping for drinks along the way.

When driving you have to be careful and not hit them! 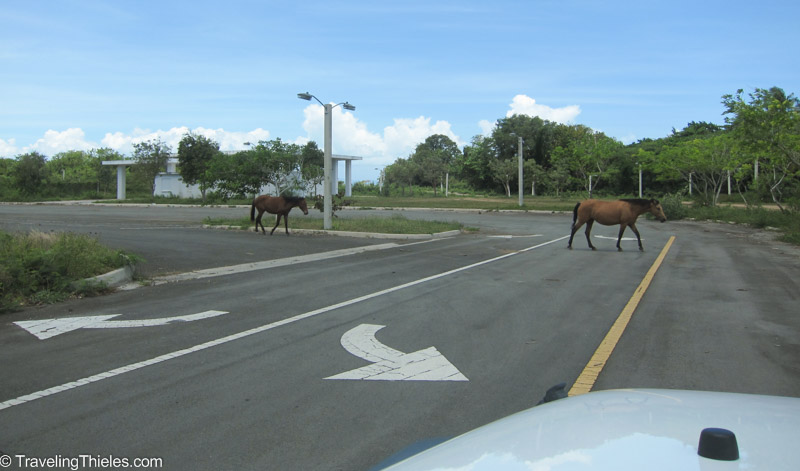 In terms of flora, most of the island is scrubby, sub-tropical dry forest and uninviting like many of the other islands we have been on. The exception was this ancient Ceiba tree (said to be approximately 500 years old). Water is stored in the giant, fan shaped roots and pollination is by bats. It was amazing to think that this tree was there around about the time the island was originally settled by Europeans in the late 15th century.

Our last stop was a night-time tour of the bio-bay, so called because of the dinoflagellate Pyrodinium bahamense which glows whenever the water is disturbed. The color is described as neon blue, but it my mind it’s almost yellowish. Words and pictures can’t describe how cool this experience was and was totally worth the price of the kayak tour. Apparently this is the most luminescent bay in the world as well, so I guess I won’t be going to another one for fear of disappointment! I don’t have pictures but you just have to take my word for it..

We loved our stay on Vieques and would definitely go back for another relaxing beach vacation! The beaches truly are phenomenal, there is minimal development and the laid-back island lifestyle could get contagious. There is also the small island of Culebra just near Vieques, which is supposed to be even more pristine..